skip to main | skip to sidebar

Welcome to the Sisterhood of the Traveling Igorota 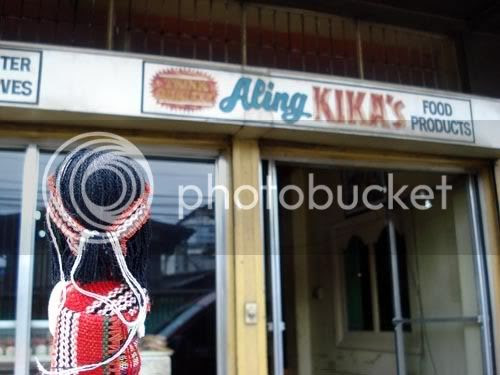 mr. iggy found himself at Aling Kika's in Cainta, where the town's famous "bibingka" comes from. 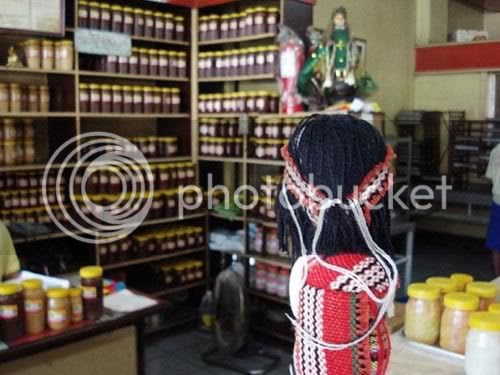 there's a wall full of coco jam jars behind the counter. gingmaganda borrowed a jar for a photo op: 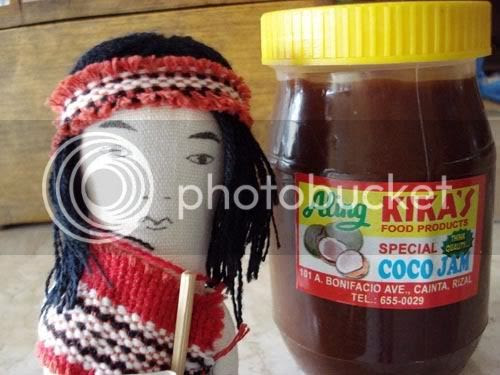 and the purpose of the visit: 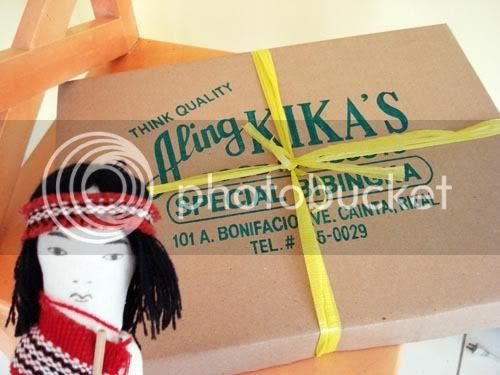 yummy bibingka. bibingka is usually referred to as "rice cakes" but depending on where you are in the philippines, bibingka can take on many shapes and forms. here in cainta, bibingka looks like this: 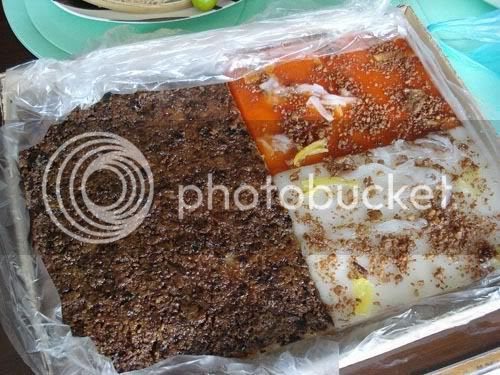 the brown part is biko with latik (sticky rice with something only marketman can explain), the orange one is kutsinta and the white one is sapin-sapin (literally means "layer-upon-layer"). birthdays, christmases, new year's eves and other parties are not complete without bibingka from Aling Kika's. Filipinos believe that biko brings good luck to parties. the sticky rice dish makes people "stick" to one another too, injecting a sense of unity in a community. if one is to read this in a larger perspective, or in a metaphorical one, the biko has powers for nation-building, with rice being a staple food for Filipinos from north to south.

an added bonus when you visit their store are the various paintings on the wall. they are of ladies in traditional Filipiniana garb with a bilao of bibingka on top of their heads, ready to be sold to anyone who fancies a slice of the sweet rice cake treat. there is also a painting of the old Aling Kika's store when it was still a bahay-kubo ("nipa hut"). you can also get a peek into their "kitchen"--- where large ovens stand like sentinels and where all the bibingka goodness comes from. a larger-than-life image of the nazarene might also be seen should one of the main doors open, the ones in front of the bibingka counter.

to get your own Aling Kika's bibingka, their store can be found along A. Bonifacio Avenue in Cainta, Rizal, a few meters away from the municipal town hall. give them a ring at 63-2-655-00-29. they also have puto, atsara, peanut butter, and other sweets.

[cainta, rizal is also known as the "bibingka capital of the philippines."]
an idyllic igorota moment by gingmaganda @ 9:10 PM

haha, you kept your promise! there's the coco jam!

i think if i try to look for coco jams here in jersey, all i will find is the ludy's brand. haha.

you think maybe "biko" should be the national dessert of the philippines? our answer to the chinese tikoy. :P

waaaaaaa!!! I love biko and bibingka! shyet! I'm craving for one right now!

"he brown part is biko with latik (sticky rice with something only marketman can explain)" -- i think the sticky part is caramelized brown sugar. ;-)

Wait, is the word "biko" tagalog too? :lol: I also love masi (sticky rice w/ peanuts inside), palitao, budbud made from casava and also pitsi2x and kutsinta! Waaaaaaaa

Wonder if I can get these goodies in Singapore?

Oh yes, thank you for mentioning it Doi. I love masi, too!

Ging, I haven't been to Aling Kika's but there is one place in Lucban, Quezon known for its yummylicious bibingka - I forgot the name of the place though. Their bibingka there looks like a giant ensaymada... tsalap-tsalap.

I am feeling hungry!

i didnt know that they are the bibingka capital. sounds really good. you must also try the bibingka of san pablo laguna.

That pork looks sooo good. That with some sticky rice and I'd be in heaven.

the story of miss igorota

what is an igorot/igorota, anyway?

would you like a free miss igorota postcard from new jersey? that's right, "F-R-E-E!" just email us your name and complete mailing address to missigorota@gmail.com, with subject heading "free postcard." 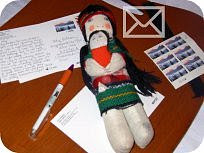 sisterhood of the traveling igorota 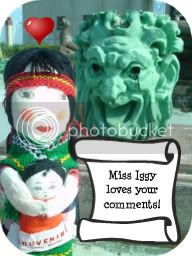 "postcards from miss igorota" is the collective intellectual property of gingmaganda, princess ody, sreisaat, sailormoon, the becky, msfirefly, lauren, witsandnuts, kayni & conniechiwa a.k.a. fortuitous faery, © 2008-2011. copyright for photos and words belong to the respective bloggers as identified by each post's byline. the ideas and views expressed by each blogger do not necessarily reflect those of the rest of the sisterhood. header graphic design by gingmaganda. strawberry graphic by kevin andersson, photoshopped by conniechiwa as an rss feed icon. all rights reserved, my friend!

spread the strawberry jam, spread the word! stick this label on your page!